The two most challenging days so far …

Where to start and explain why those two days feel like the most challenging ones so far. First of all because of the travelling. The journey itself was well prepared, and also breakfast on #DAY11 run smoothly as there were fresh bread rolls, some leftover nut spread from christmas and jam. There was no real lunch on Saturday as this was a very special day for me entombing my beloved dad in a peaceful forrest next to a wonderful tree. His tree for the next 99 years.

During the very relaxed get-together afterwards I had brought myself some vegan cookies and dry bread rolls while the rest would have cake, sandwiches and goulash soup. Lucky me most alcohol is vegan, so I could have this 😉 and we could cheer on my dad as he had asked for.
Dinner we spent at my moms place. I was starving and griefing for something warm and delicious. The only things available were potatoes and red cabbage, so I had this. Later on I found out that of course the red cabbage had some bacon inside – but never mind, that can happen and there would have been no way to not eat it feeling as I felt.
A bit later this evening when my husband started eating bread with cut meatballs and mustard, I had to make myself another bread roll too. Of course without meatballs but with mustard and some gherkins. Eating this very weired combination I almost felt like being pregnant.

So not much inspiration from #DAY11 for you and also #DAY12 has not really something inspiring because for me it rather felt just like surviving. 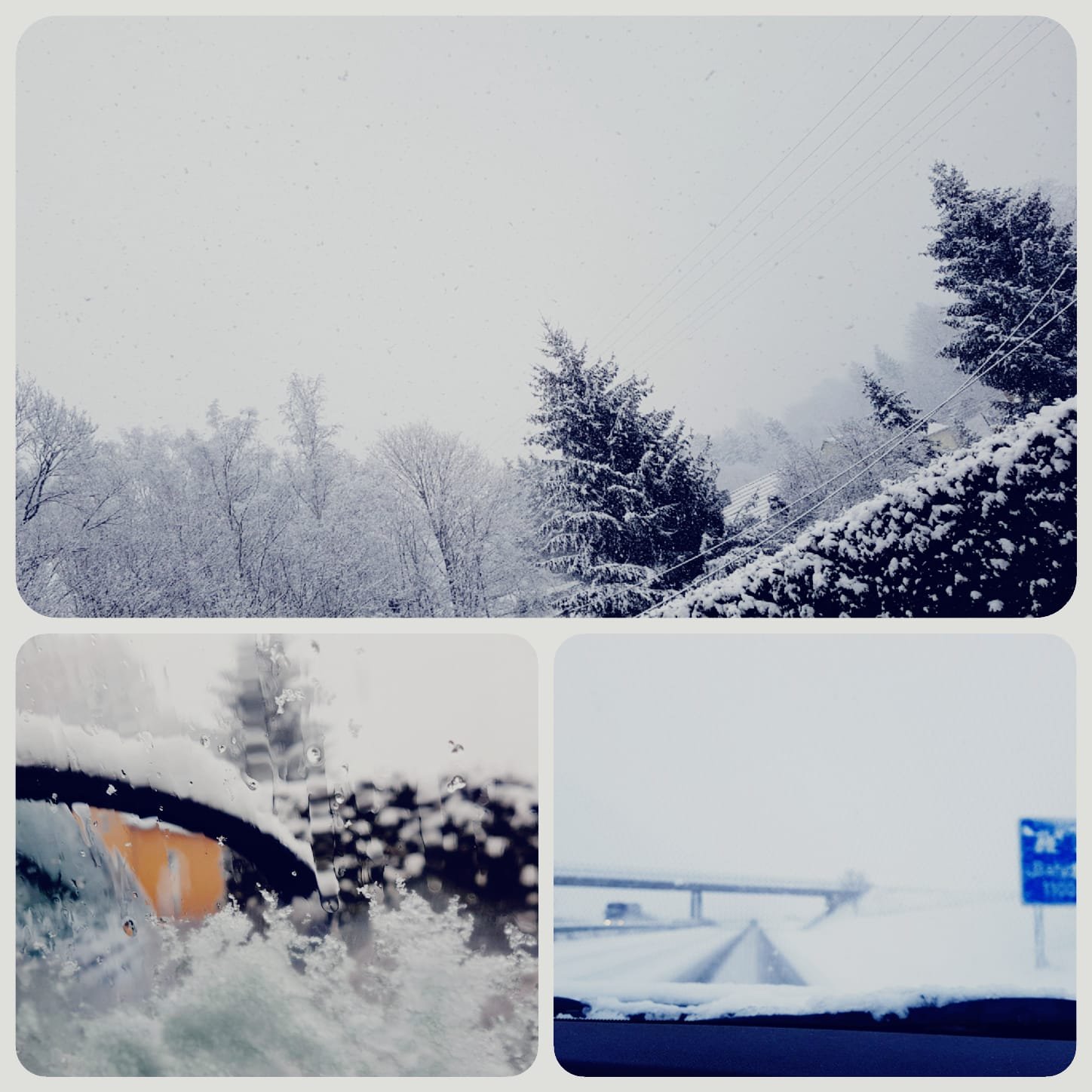 The biggest challenge in the morning was to see the snowflakes falling and falling, very dense and very beautiful. I would have loved just to watch and go for a walk, but unfortunately it made me very nervous knowing that we had 670km to drive ahead us. We packed and prepared quickly. Here came the first frustration since being vegan – nothing appealing left to put on my sandwiches … only some jam. 🙁 The next challenge was to get on the motorway. No chance to get up the steep hill of our regular way. Instead we had to take another one and also there we almost failed and could only slowly slowly climb up the hill. Entering the motorway did not really stop my anxiety about the roads, but we had to go. It took us three ours from Dresden to Prague what you can usually drive within 1.15h – the most horrible trip we ever had …

To see the positive in the negative – those circumstances totally floaded away my thoughts about food. The hunger went by and I was just relieved when the road situation changed, and grateful for my ordinary bread rolls, some vegan cookies, apples and a couple of pieces of red pepper. Exhausted from the day before and this extremly thrilling journey we decided to order dinner from Papirtigris – so I had rice noodles with honey and ginger again. I emptied the entire plate, followed by a lovely dessert – coconut jogurt – very delicious and highly recommended – so at least one recommendation for you.